about young Arrick Swanson who dreamed of one day owning his own fly shop. 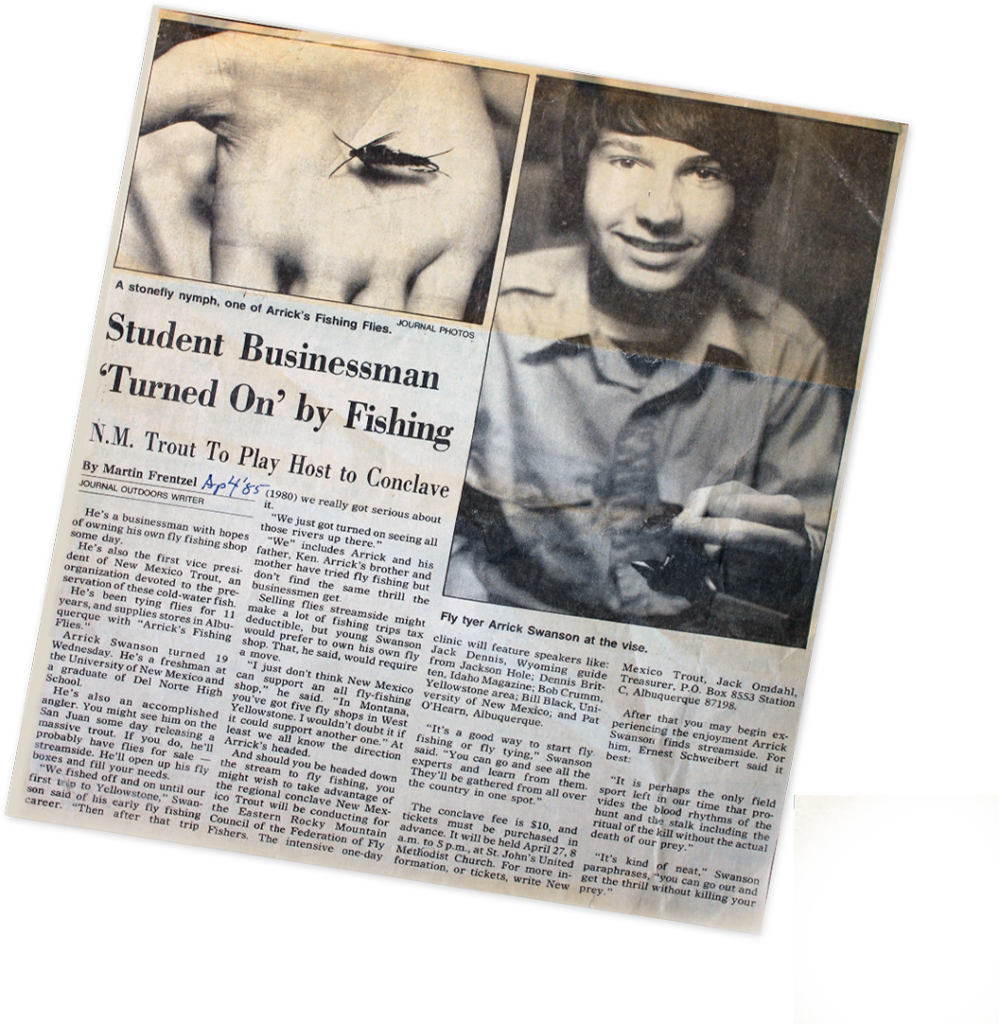 Student Businessman ‘Turned On’ by Fishing

He’s a businessman with hopes of owning his own fly fishing shop some day.

He’s also the first vice president of New Mexico Trout, an organization devoted to the preservation of these cold-water fish.

He’s been tying flies for 11 years, and supplies stores in Albuquerque with “Arrick’s Fishing Flies.”

Arrick Swanson turned 19 Wednesday. He’s a freshman at the University of New Mexico and a graduate of Del Norte High School.

He’s also an accomplished angler. You might see him on the San Juan some day releasing a massive trout. If you do, he’ll probably have flies for sale-streamside. He’ll open up his fly boxes and fill your needs.

“We fished off and on until our first trip to Yellowstone,” Swanson said of his early fly fishing career. “Then after that trip (1980) we really got serious about it.

“We just got turned on seeing all those rivers up there.” “We” includes Arrick and his father, Ken. Arrick’s brother and mother have tried fly fishing but don’t find the same thrill the businessmen get.

Selling flies streamside might make a lot of fishing trips tax deductible, but young Swanson would prefer to own his own fly shop. That, he said, would require a move.

“I just don’t think New Mexico can support an all fly-fishing shop,” he said. “In Montana, you’ve got five fly shops in West Yellowstone. I wouldn’t doubt it if it could support another one.” At least we all know the direction Arrick’s headed.

And should you be headed down the stream to fly fishing, you might wish to take advantage of the regional conclave New Mexico Trout will be conducting for the Eastern Rocky Mountain Council of the Federation of Fly Fishers. The intensive on-day clinic will feature speakers like: Jack Dennis, Wyoming guide from Jackson Hole; Dennis Britten, Idaho Magazine; Bob Crumm, Yellowstone area; Bill Black, University of New Mexico; and Pat O’Hearn, Albuquerque.

“It’s a good way to start fly fishing or fly tying,” Swanson said. “You can go and see all the experts and learn from them. They’ll be gathered from all over the country in one spot.”

The conclave fee is $10, and tickets must be purchased in advance. It will be held April 27, 8 a.m to 5 p.m., at St. John’s United Methodist Church. For more information, or tickets, write New Mexico Trout, Jack Omdahl, Treasurer, P.O. Box 8553 Station C, Albuquerque 87198.

After that you may begin experiencing the enjoyment Arrick Swanson finds streamside. For him, Ernest Schweibert said it best:

“It is perhaps the only field sport left in our time that provides the blood rhythms of the hunt and the stalk including the ritual of the kill without the actual death of our prey.”

“It’s kind of neat,” Swanson paraphrases, “you can go out and get the thrill without killing your prey.”